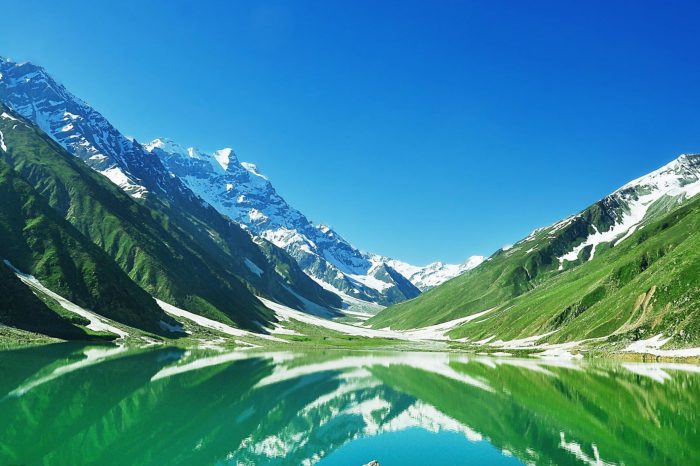 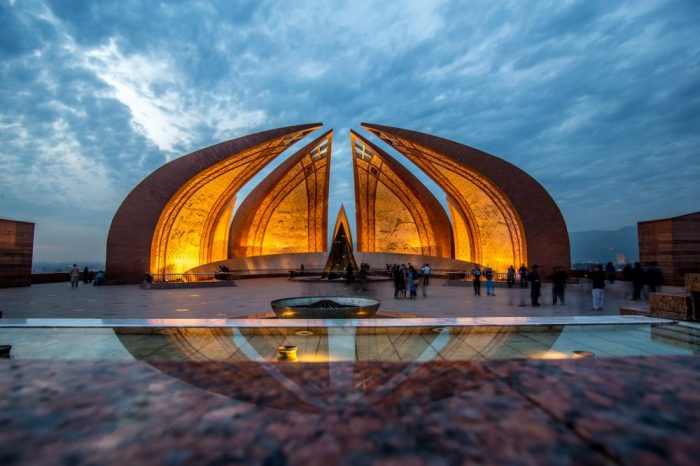 Rich with history, culture and spectacular architecture, there’s really no other place in the world quite like Karachi.

“Karachi” Known As The Heart Of Pakistan

It is not every day that I travel far to meet people I have never met before (except by email, that is) but, with some apprehension, that is exactly what I did when I went to Karachi on business last week. The most dangerous city in the world, a friend warned, another pronounced me mad even to contemplate the trip. I didn’t listen. And I am glad I didn’t. Karachi was definitely not frightening, nor is it beautiful though its people are and so are its buses and trucks. And the food is utterly delicious.

The driver was very amused by my compulsion to snap every single colourful bus and truck we passed. Some photographs, I took through the window because I wasn’t quick enough to lower it. Also it was very hot and dusty and I needed to stay cool inside with the air-conditioned car. I took too many to post here but here are a couple of my favourites. Apparently each bus belongs to its driver; and he alone decides on the decoration. I guess economics come into play as well. The richer the driver, the more elaborate the decorations. I should have really snapped buses with people sitting on top; also those with their lights twinkling at night. Perhaps when I return. 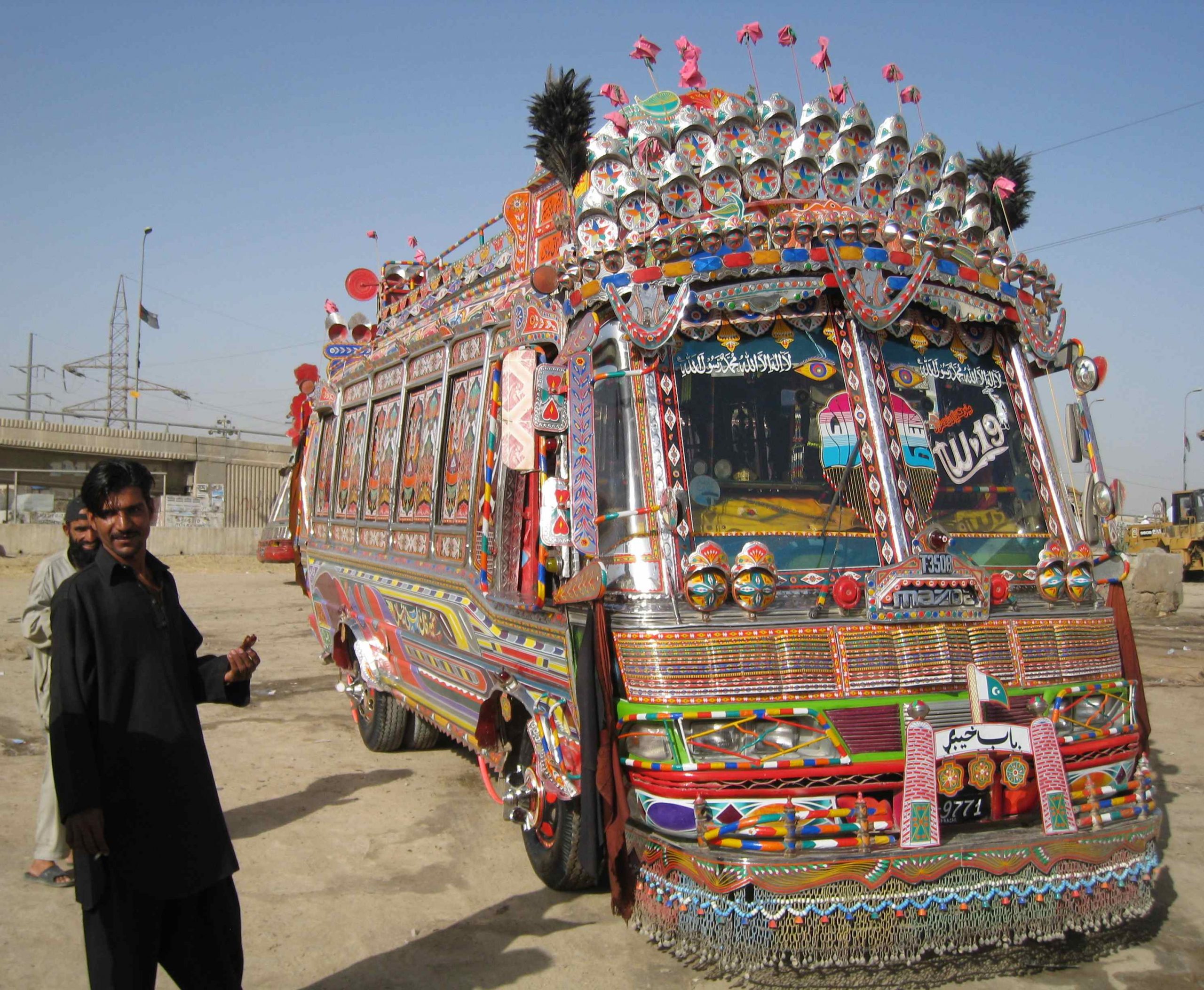 As for the food, I knew a little about it from eating at the Lahore Kebab House and Salloo’s, the first cheap, the second expensive but both excellent although the Lahore has gone down since they expanded. In any case, a Pakistani friend had told me to try Bbq Tonight <http://www.bbqtonight.com/>, saying it was the best restaurant in town. Luckily, it was where my hosts took me to dinner the first night. It was indeed very good, but even more interesting was the scene. The restaurant is over four huge floors, and it was heaving with people: groups of religious men, families with hundreds of children, even an engagement party with the most ravishing bride. She agreed to be photographed although she wouldn’t lift her eyes. Gorgeous either way.

Outside, the scene was just as frantic with long charcoal grills manned by dozens of chefs. I don’t think I have ever been to such a busy restaurant, neither in Lebanon nor in Syria where the 6014-seat restaurant in Damascus is certified as the largestÂ  in the world <http://news.bbc.co.uk/1/hi/world/middle_east/7435424.stm>. Mind you when I went to Damascus Gate, it was the middle of the afternoon so not exactly mealtime. Must return one weekend evening to check the scene there.

The next evening, I was taken to another great fun restaurant called Village, right by the sea and serving typical rural dishes buffet style. I had fried quails, a first for me; brains in a lovely spicy sauce; delicious biriani and fabulous steamed mutton with a sweet rice. But the discovery of the evening was betel leaf. There was a small cart inside the entrance called pan wala where one man spent the whole evening making little betel leaf parcels. He first smeared the leaf with a sweet tamarind sauce, then he piled up all kinds of funny looking sweet mixtures before adding two more sauces. He folded the leaf over the filling and gave it to whoever wanted one to pop in their mouth and chew on it. I was reluctant at first, having read about red stains and betel but that’s the nut. Then I thought I was silly to pass up the chance to taste it, so, I asked for a child portion — he made tiny parcels for the children. But he ignored my request and gave me a regular size. It was surprisingly good although I can’t say it would be the first thing I would rush to have when I go back there. The steamed mutton and sweet rice perhaps. 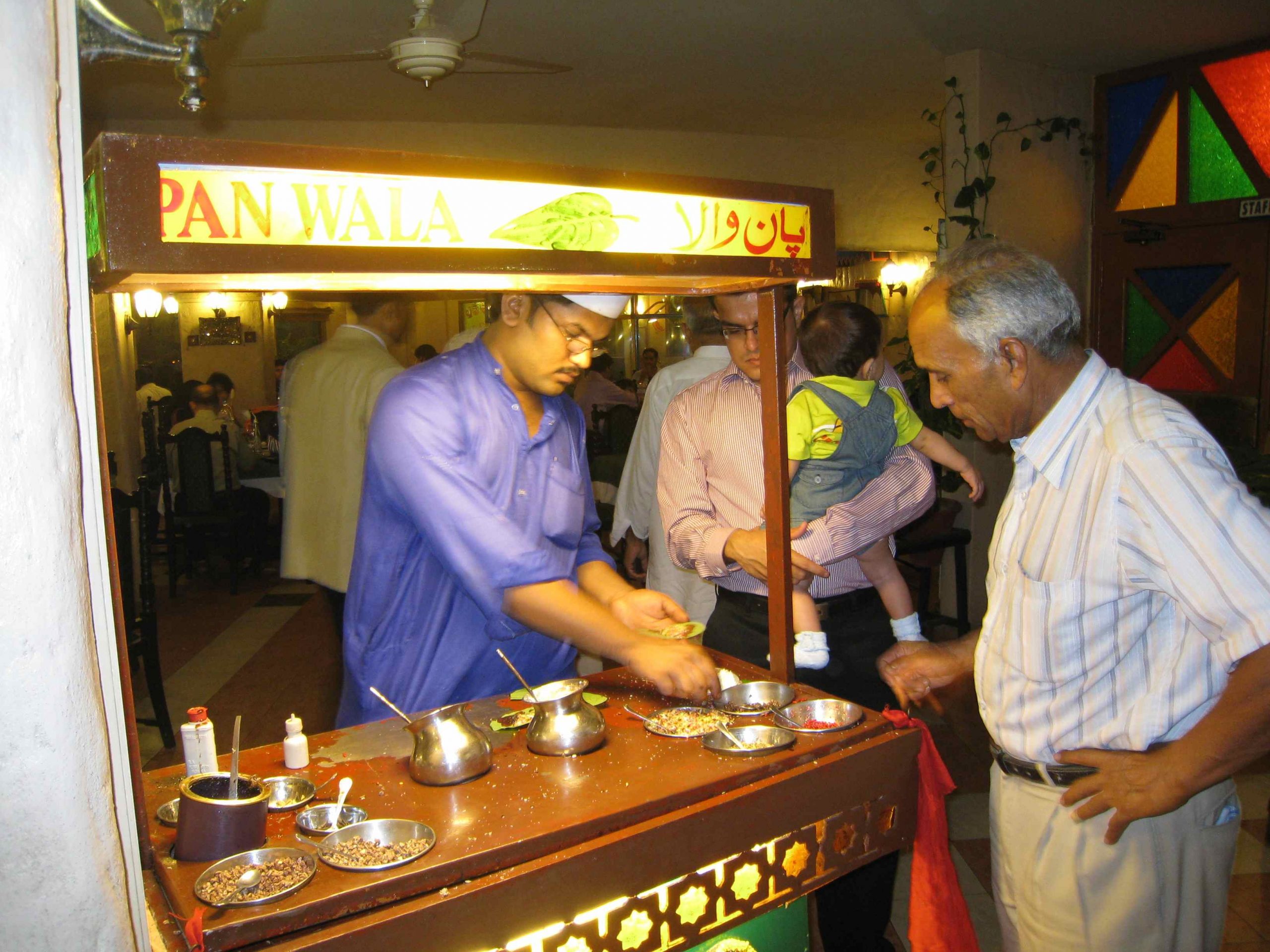